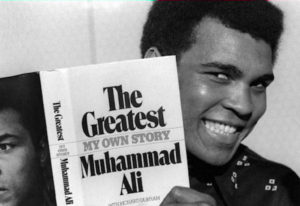 Widely regarded as the greatest pound-for-pound boxer of all time, Muhammad Ali is a name familiar with people all over the world, and his career achievements will probably never be repeated. Outside of the ring, Ali was an equally as special human being. He was a man who will undoubtedly be remembered forever, for a myriad of reasons; the main of which was his unparalleled boxing talent.

Ali took up the sport of boxing at the age of 12 (at which time he was known as Cassius Clay, his birth name), and remarkably just ten years later he was crowned heavyweight champion of the world. Prior to this, his career started perfectly with two national Golden Gloves titles, and a gold medal at the 1960 Olympic Games in Rome. It was already evident at this stage in Ali’s career that he had a bright future in boxing, and his reputation began to spread beyond his home of Louisville, Kentucky.

Just months after his success at the Olympics, Ali turned professional, and amassed a total of 19 victories from 19 fights within three years. His 20th fight was without doubt the biggest and most important of his life. His opponent was Sonny Liston, who held ‘The Ring’, WBA and WBC world heavyweight belts going into the fight. In the 1960’s, Liston was akin to Mike Tyson, with a huge right hand and a strong, intimidating physique. Ali was written off before either man even stepped in the ring, as the whole boxing community believed Liston to be unbeatable. The fight proved to define Ali’s career. In the build-up, Ali was broadcasted on television for the first time, showing-off his confident attitude and slick, humorous “trash-talking” which is still popular amongst all generations today. Ali’s rapid footwork and fast hands proved troubling for Liston, who despite landing some heavy shots, struggled to find his way in the fight. At the start of the seventh round, the unthinkable happened, as Liston refused to get up from his corner, and surrendered. Ali jumped to the ropes before declaring to the world, “I’m the greatest!”

From this point on, Ali truly was. He knocked Liston out in their rematch and continued on a stunning winning streak. However, in 1967, he was suspended from boxing for conscientiously objecting to joining the army in the Vietnam War. Sadly, this resulted in Ali losing out on four prime years of his career, and who knows how much more he would have achieved had he not been suspended. Nonetheless, Ali returned to the ring, but in his thirty-first professional fight, he suffered his first ever loss to Joe Frazier by unanimous decision in an epic 15-round battle, which was later to be dubbed “The Fight of the Century”. In 1974, Ali avenged this loss and then went on to regain the titles he lost to Frazier in the “Rumble in the Jungle” with an eight round knockout against George Foreman. Ali then beat Frazier once more in their third and final contest, and at 36 years of age he forged another rivalry with Leon Spinks, where he lost and then won back his heavyweight world championships. He hung up his gloves just shy of 40 years old, and many argue that he should have retired sooner.

Boxing aside, Ali made a difference in many ways. He was a prominent civil rights activist for African-Americans, and most of his talking was done within the ropes, which for Ali was the best and easiest way to silence any critics. His objection to war also inspired many, and he was not nicknamed “The People’s Champion”. In 1984, Ali was diagnosed with Parkinson’s Syndrome. Sadly his health dramatically deteriorated very quickly, but Ali was still fighting even until his final breath, as he passed away on June 3rd 2016, aged 74, still the champion that he had always been.