Sometimes called “pure boxing” or even just “boxer,” this is widely regarded as the most traditional style of boxing. When most people attend a boxing match, this is the kind of boxing they want to see. It’s the most technically perfect style, and it’s what people expect when they think of boxing.  It can be exciting to watch because it requires the boxer to come in for a quick succession of hits, or even just a single hit, and then back off again. Some consider it to be boring, because the boxers also spend a lot of time waiting for the right moment to strike, but for those that love strategy, it is the best style to watch.

Many boxers who use this style of pure boxing will wait for their opponent to make the first move or to move in on them before stepping out to land any punches. They generally have to have a long reach, because they like to maintain distance from their opponents, preferring to land long range punches. Quick on their feet and preferring jabs and straight punches, rather than the hooks and uppercuts preferred by swarmers, out-boxers rarely get knockdown or knockout bonuses, instead winning by being apt decision makers and by landing clean, legal punches.

Of course, there are some exceptions to every rule. Those with great reaches have been able to earn those aggression points by landing harder punches on their opponents from the outside. They are most susceptible to swarmers, who move just as quickly and who overwhelm them with their punches, giving the out-boxer no time to think and no openings. Despite the fact that they are easily overwhelmed by a boxer who swarms or crowds, an out-boxer is cautious. They play the game their way, making smart decisions about where to strike and when, rather than wasting their stamina with quick flurries of punches.

They are light footed, energetic boxers who wear their opponents down. They are distance runners, rather than sprinters. Because they make only carefully calculated moves, out-boxers usually get higher scores, as they make fewer mistakes. Knockouts are possible, especially in long bouts, after an out-boxer has taken the time to wear their opponent down.

Sometimes called the crowder or the in-fighter, the swarmer is a boxer who endeavors to beat his opponent by being both very defensive and by putting consistent pressure on that opponent. They just keep punching and punching, giving their opponent little room to get a punch in edgewise. This is one of the more difficult styles to achieve, as it requires nearly perfect form and the stamina to continually apply pressure to the other fighter.

Most boxers endeavor to achieve the status of a swarmer, but it takes years of training to perfect the form and the technique required to really overwhelm an opponent with punches. Because of the time required to get up to this skill level and to build the necessary stamina, most boxers who claim the swarmer style have comparatively short careers. It is difficult to maintain, as it requires constant training, and it is easy to fall out of, which leaves to boxer open to punishing hits, which can further shorten their career.

Most boxers who use this style do it by closing in on an opponent and then sending out intense, fast uppercuts and hooks. As they are throwing these punches, they also have to be able to avoid whatever punches their opponent is sending out. Because it usually takes a moment to get into the right position, these boxers either have to be able to withstand many punches before they can start throwing their own, or have to be swift enough to first evade, and then move inside their opponent.

The most effective swarmers are short or have short arms. Most of these boxers adopt this style out of necessity, as their shorter arms require them to get in close to their opponents in order to land the hits they need in order to win.

The pressure of training is what usually either makes a swamer pick a different style or retire from boxing, but when used correctly, it can be an extremely effective fighting style that can earn a boxer points especially in ring generalship and effective aggression.

The Slugger Style of Boxing

The out-boxer is known for being the class-act of the boxing world, as evidenced by its other title, “pure boxing.” On the other end of the spectrum is the slugger. If the out-boxer is the class-act, the slugger is the true brawler. He relies on the brutality of his punches to win the bout, rather than on strategy and a well-placed hits. What they lack in technique, they make up for in strength and raw ferocity. This is likely the style of boxing that the Ancient Greeks and Brits who revived the sport participated in. Very few rules, just hard, devastating punches.

Unlike other fighters who rely on timing or on the sheer number of punches, the slugger will attempt to land just a few, high-power punches. While they are often a predictable and even slow opponent, the bouts are often extremely unpredictable, as a single punch could knock an opponent out cold and win the slugger the entire fight. It could even be the first punch of the round!

Sluggers are usually uncreative with their technique and punching pattern. This makes it easy for an opponent to predict how and where a slugger is going to hit, and while they might not be able to block the slugger’s hits, they can wait until the slugger sends a slow, powerful punch their way and land a few hits as the slugger opens themselves up to them.

Some boxers regard those who us the slugger’s style to be crude fighters at best. Boxing historians believe that this may actually be a purer form of boxing than the so-called “pure boxing” of the out-boxers. Some of the best sluggers are actually great boxers, who choose this style because the strength and reach makes it possible to win using this style.

If you put two sluggers in a ring together, the fight will be brutal, which makes an exciting match for spectators, who might get bored watching two out-boxers pace around each other. Sluggers and swarmers also put on a good show, as neither is very concerned with caution or strategy, but both want to get in good punches, as quickly as possible. Casual fans of boxing often prefer seeing a slugger fight a swarmer, as there is always plenty of action.

Boxer-puncher boxers are hybrids. They have the power of sluggers, but the technique of an out-boxer. They are considered to be well-rounded fighters, who can compete with just about any other style in the ring. Because their focus is on speed and power, they can usually dominate an out-boxer, tire out a swarmer, and out-punch a slugger. This is widely believed to be the ideal style, but it requires a boxer to be both fast and strong, which is not something that all boxers, especially in the higher weight categories, are able to achieve.

Most people consider the heavy slugger to be the only weakness of the boxer-puncher, and only if that slugger can get in his one, devastating hit before the boxer-puncher has the chance to either tire him out or out-technique him. When faced with a swarmer, a boxer-puncher can use his powerful punches to prevent that swarmer to ever get inside and land their punches. They can match an out-boxer’s speed and technique, while also bringing the power that it takes to really devastate the out-boxer.

These boxers are extremely versatile. They do not necessarily have to rely just on speed or just on technique or just on power in order to win a bout. They have many skills to draw on, which makes them good aggressors and good counter-punchers. Unlike swarmers who can sometimes get too close and open themselves up to too many hits, a boxer-puncher takes control of the ring, watches his opponent, does what he needs to do, and uses his opponent’s mistakes to his advantage. They generally have great chin, are excellent at defense, and are highly mobile.

Sometimes, it is difficult to tell what category boxer-punchers actually fall into. Many are labeled as sluggers or boxers, when they really should be boxer-punchers, instead. While many fighters endeavor to become boxer-punchers, this style may be the best for some, especially if they do not have the power or the speed that this style requires.  Most notable boxer-punchers are just naturally versatile athletes. Of course, any boxer of any style can beat a boxer-puncher, if they are a better boxer.

Some of the most famous boxer-punchers include Manny Pacquiao, Oscar De La Hoya and Sugar Ray Robinson.

The Counterpuncher Style of Boxing

While not technically its own style of boxing, this is a technique that many boxers use to effectively earn points and even knockout opponents while their opponent is actually on the attack. For fighters who are up against boxers who use the swarmer or slugger approach, being a counterpuncher is a great way to get hits in, even while your opponent is coming at you with fast or powerful punches.

The best counterpunchers are actors as well as warriors. Not only do they have to avoid being hit, they also have to conceal their intentions, allowing the other fighter to get in close enough to attack, before they realize the counterpuncher’s intentions. The most famous and successful counterpunchers are not just strong punchers, they have excellent reflexes and a tactical mind that allows them to both dodge punches as they are coming in, while also looking for an opening on the opponent’s body.

They have to a have a good handle on a wide range of punches, as they can rarely rely on the same style of punch in every situation. Sometimes a jab will be the best option, while other times a straight punch, or uppercut would be more effective.

Counterpunchers who have truly mastered their style are exciting to watch in the ring and are usually apt fighters against any other style of boxing. They can match a boxer-puncher for speed and strategy, can overwhelm a swarmer, and can use a slugger’s weight and tactics against him for much more effective punches. Many boxers who can be classified as excellent counterpunchers end up being put in another category as well, which more widely describes their fighting style. Floyd Mayweather, Jr., for example. 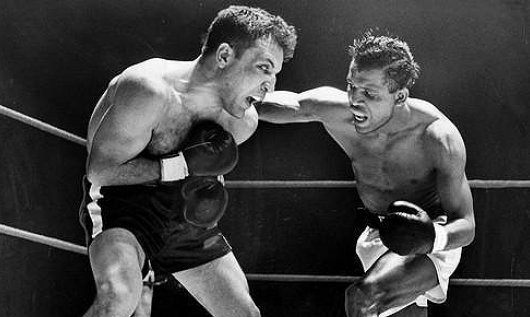